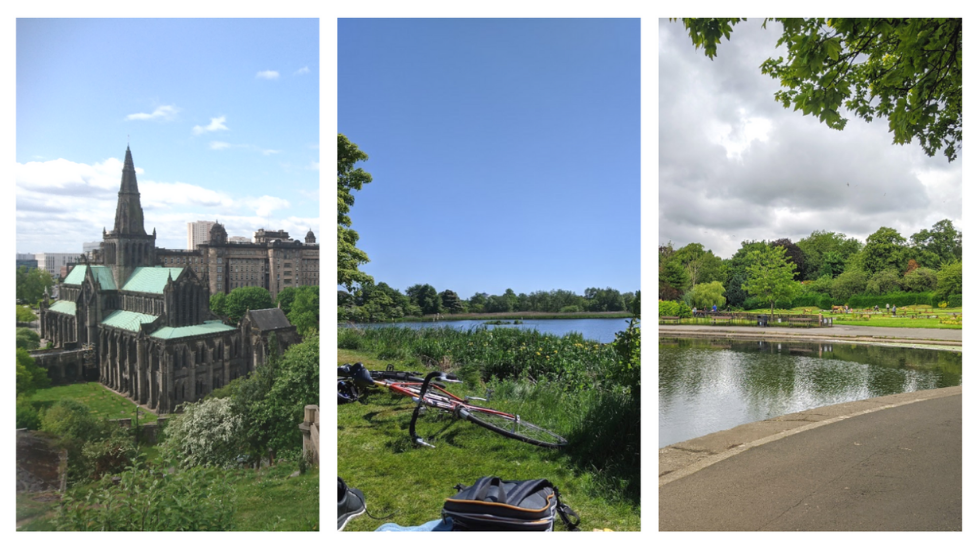 For anyone living in or near the West End, the most well-known and frequently attended parks are the Botanic Gardens or Kelvingrove Park. When the sun comes out, they’re a great place to go – but it seems like everyone else has the same idea! However, Glasgow is full of other parks that are full of lovely green spaces to explore.

This park is closest to the West End, it takes 10-15 minutes to cycle here from Kelvinhaugh Residences, Maclay Residences, Student Apartments, Thurso Street, Kelvin Court and Queen Margaret Residences. It is about a 20 minute cycle from Wolfson Hall, Firhill Court and Murano Street Student Village. It is very easily accessible by foot from the West End as well.

Victoria Park’s best feature is the pond that takes up a good chunk of the park. 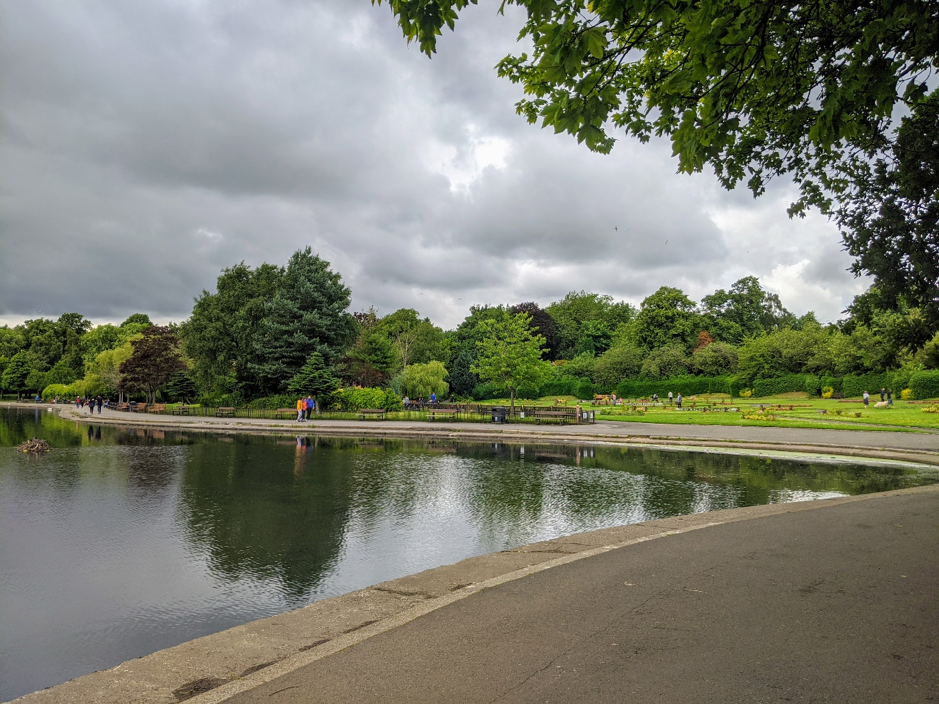 My favourite path is the one leading up to the Fossil Grove, as it is quieter, and you are surrounded by towering trees and boulders! 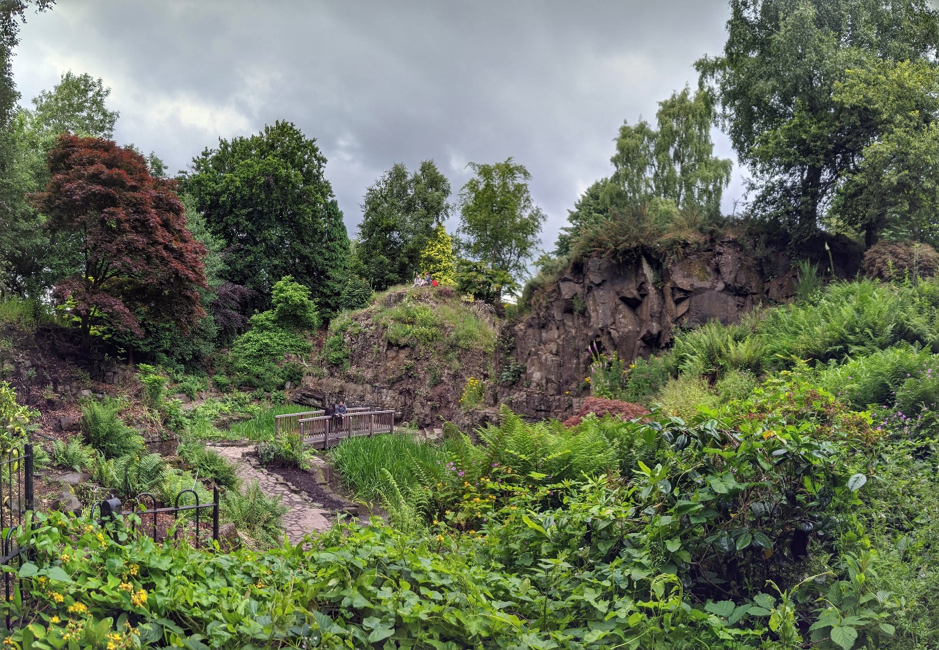 Victoria Park also has basketball courts that you can use without booking in advance! It’s first come, first served.

If you exit the park on the west side, you can cross the road and get to the Victoria Park Nature Walk, which is a brief path along through a more forested area. 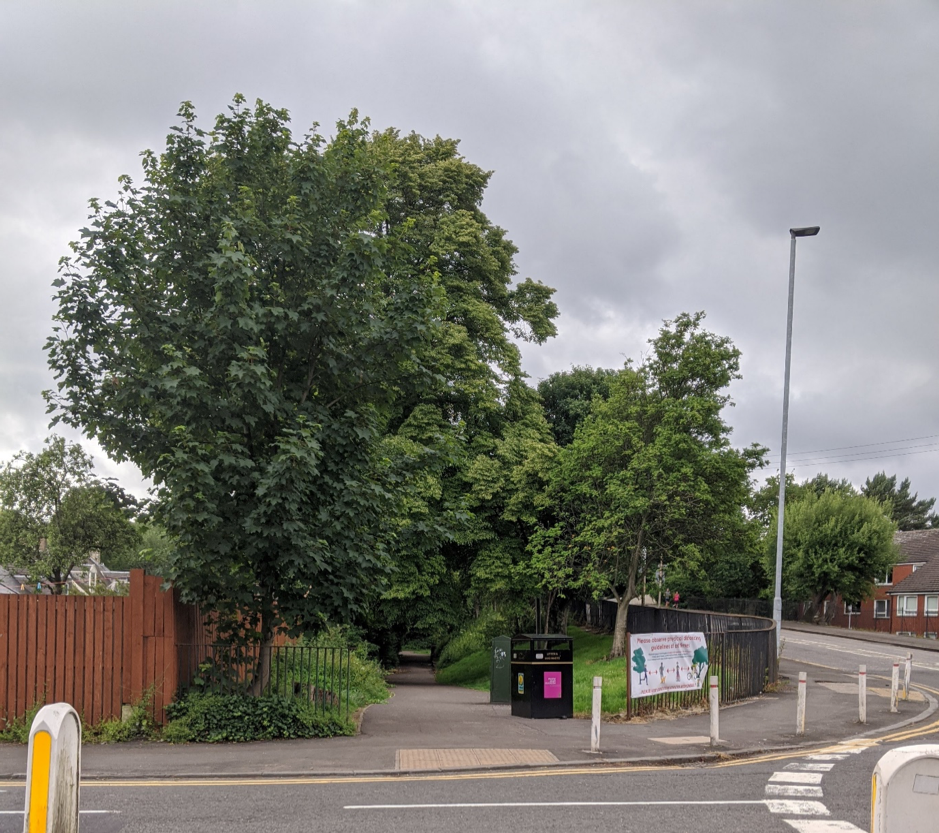 The Glasgow Necropolis is full of lovely architecture and sculptures – something for those of you interested in history or art! 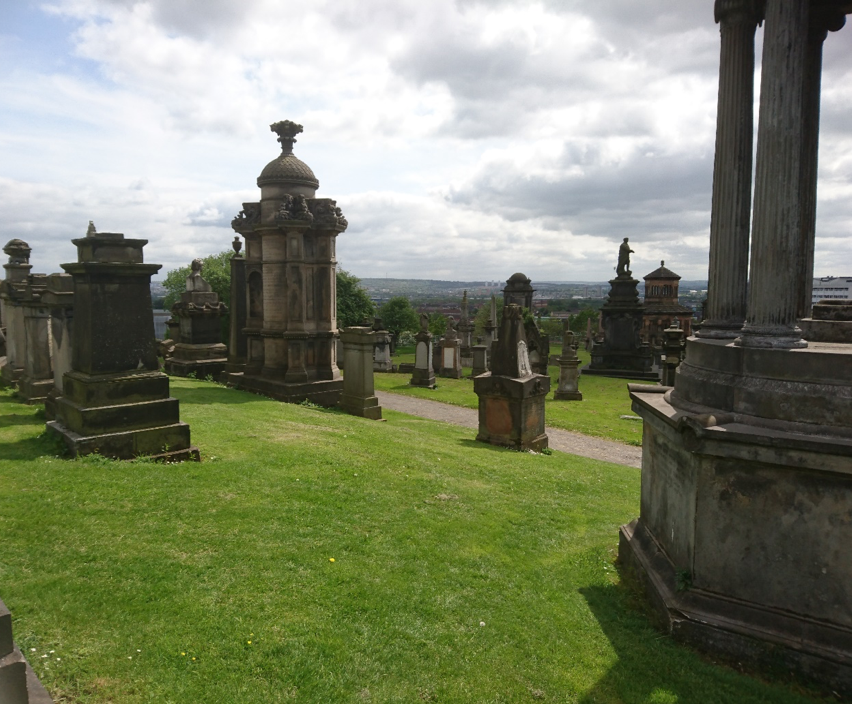 If you climb to the top, you will be on the second-highest hill in Glasgow. You will have fantastic views of the city, as well as the areas surrounding Glasgow in the east. 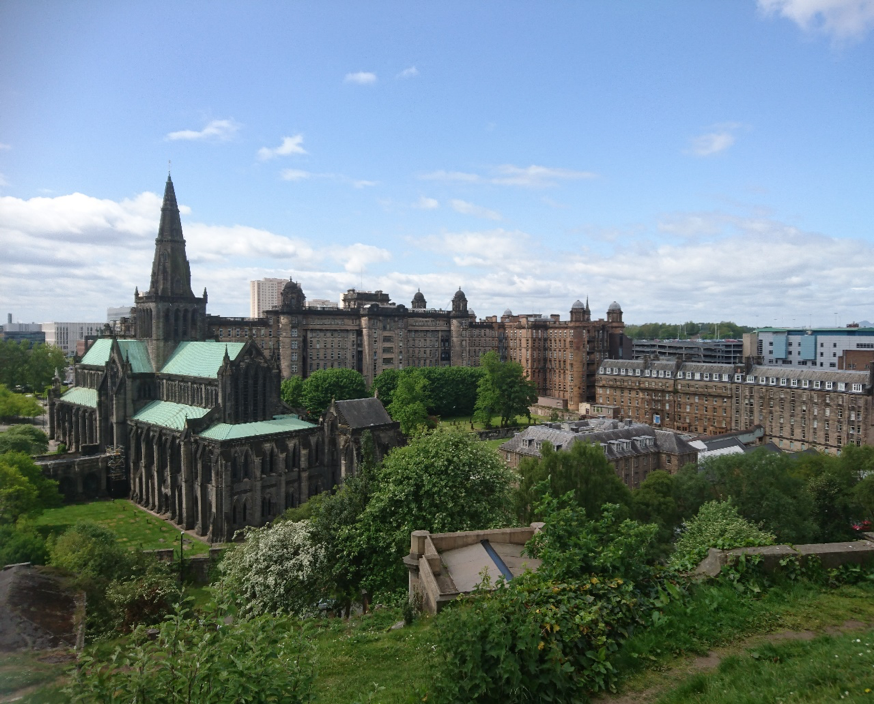 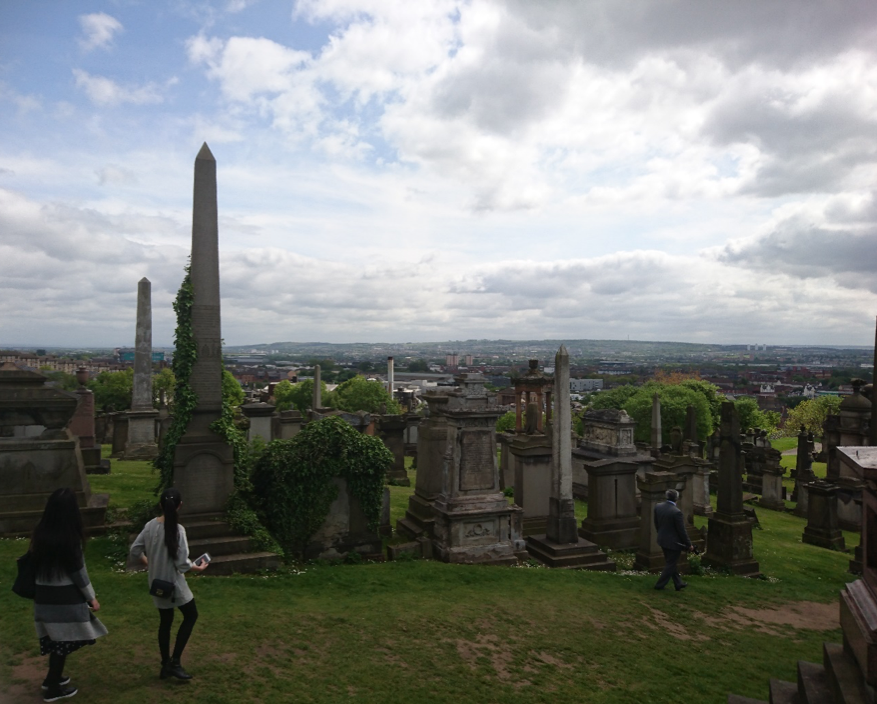 I encourage you to walk down the hill on the southern-facing side. Further on there are green, grassy spaces where you can set up a picnic.

Pollok Country Park is famous for its lovely forested grounds, as well as Pollok House, an Edwardian country house surrounded by a beautifully landscaped garden. 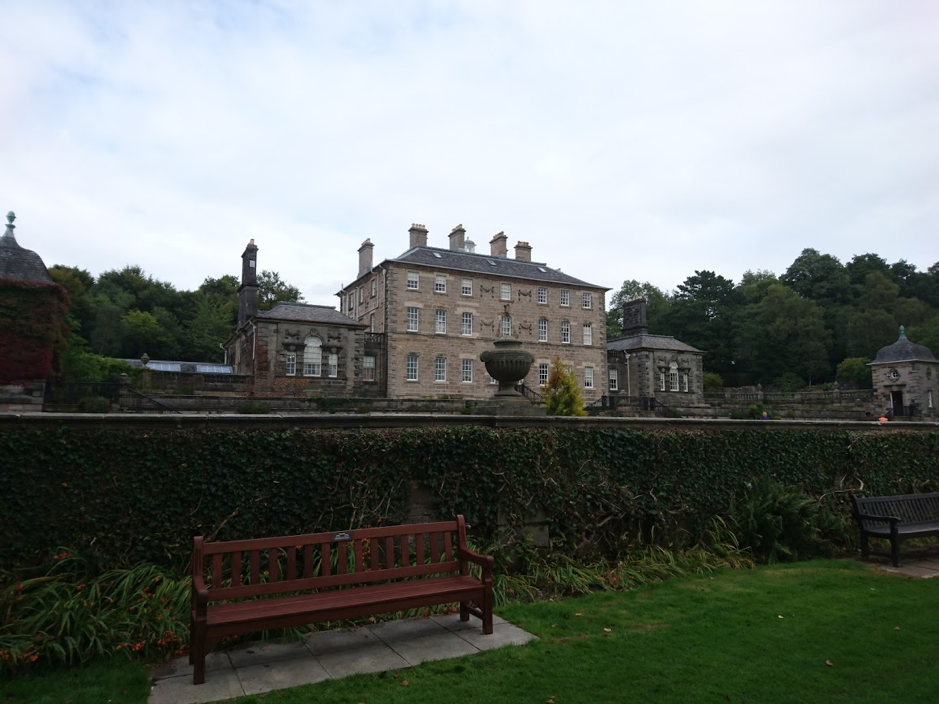 What I enjoy most in Pollok Park is picking a path at random and getting lost – if you’re lucky you might see the Highland cows! 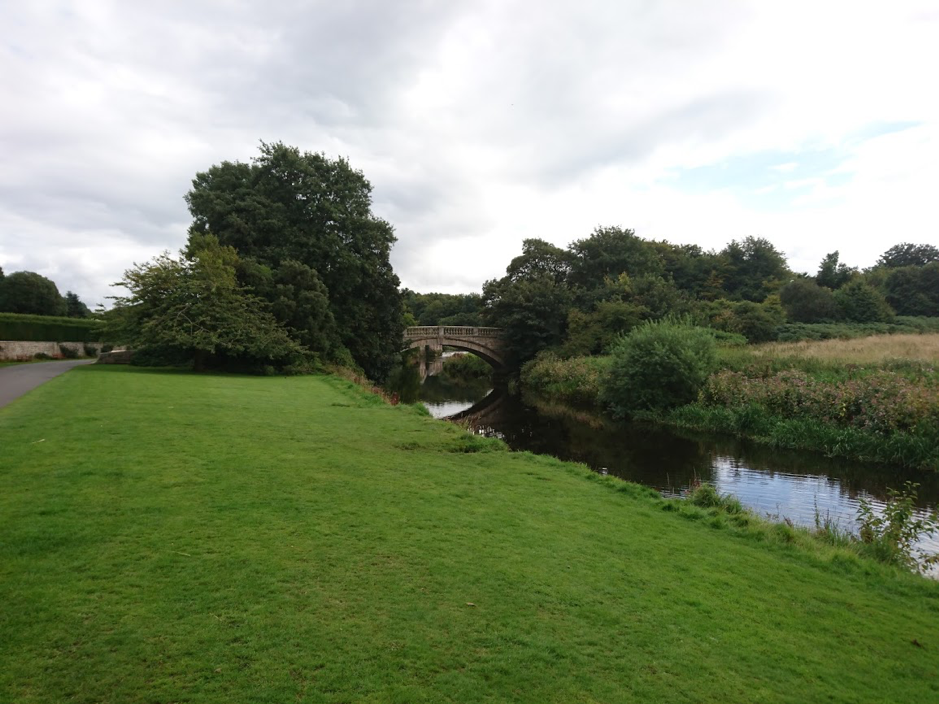 Within Pollock Park there are three mountain biking trails of varying degrees of difficulty, so if that’s something you enjoy, I highly recommend going.

There are plenty of green areas and benches for a picnic. Many people take their dogs on walks there as well, so you can make a few canine friends while you’re at it! 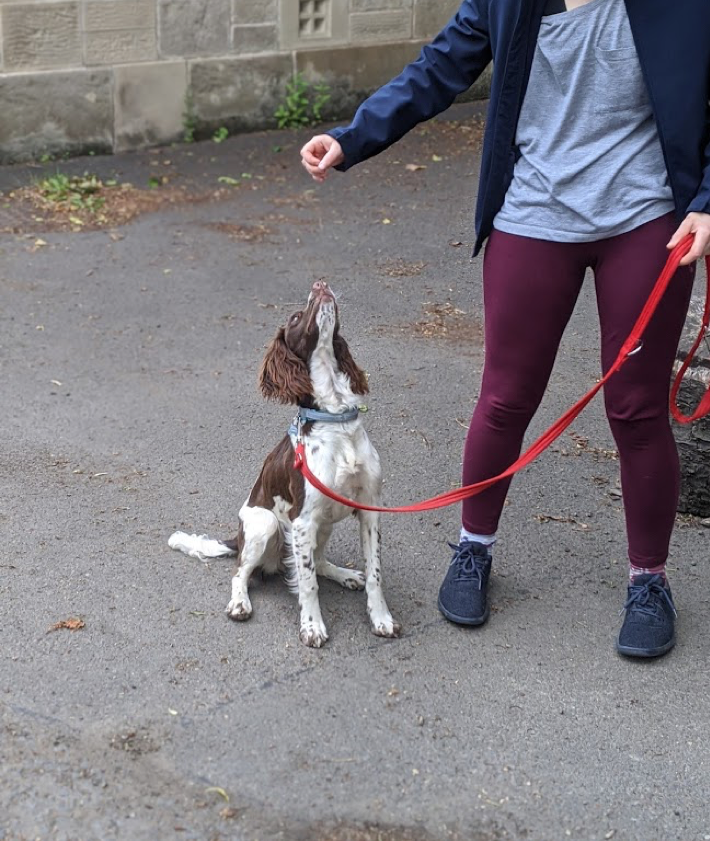 Found in the East End of Glasgow, it is about a 25-30 minute cycle from Kelvinhaugh Residences, Maclay Residences, Student Apartments, Thurso Street, Kelvin Court, Firhill Court, Queen Margaret Residences and Murano Street Student Village, while it takes about 35 minutes to cycle there from Wolfson Hall.

As you enter, there is a path with roses that bloom during the summer months. Further on you’ll see the Saracen Fountain, which unfortunately is currently not functional, but hopefully will be back up and running soon! 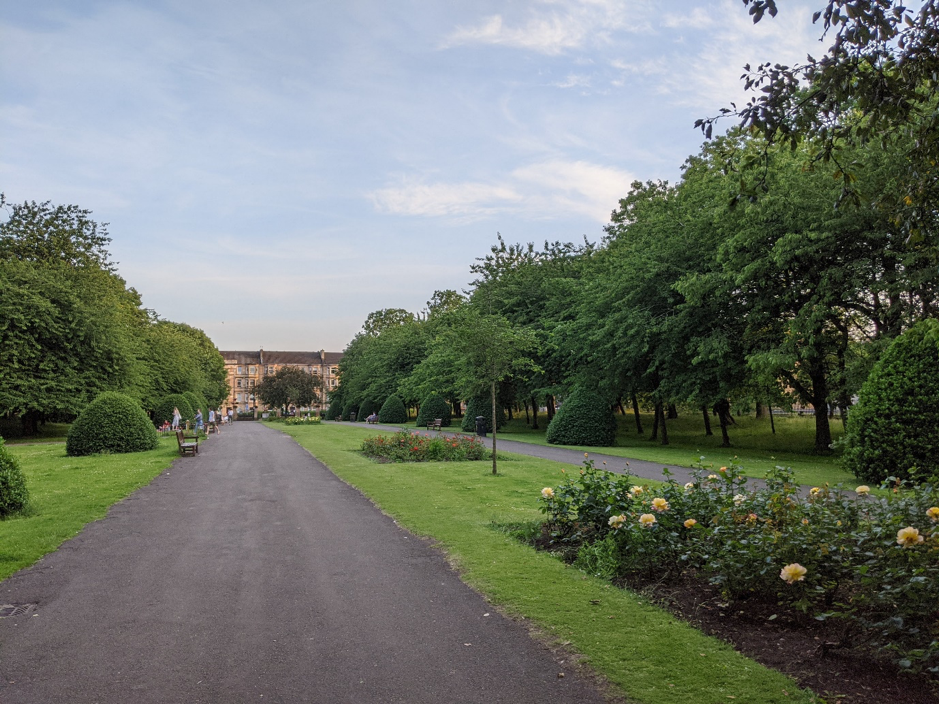 Alexandra Park also has two ponds, and plenty of green spaces and benches for a picnic after your long cycle! 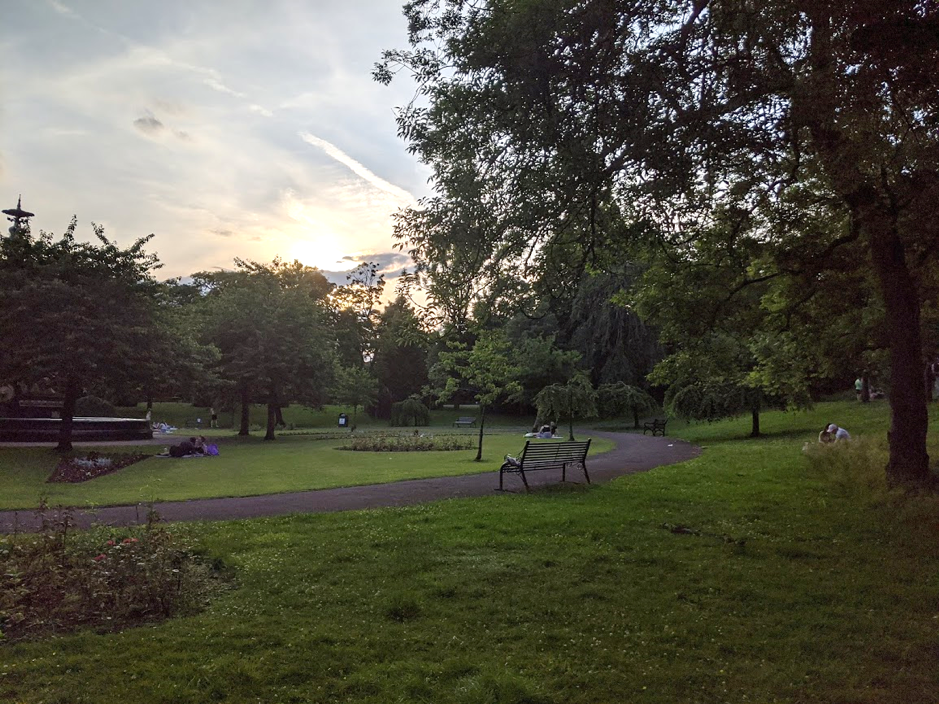 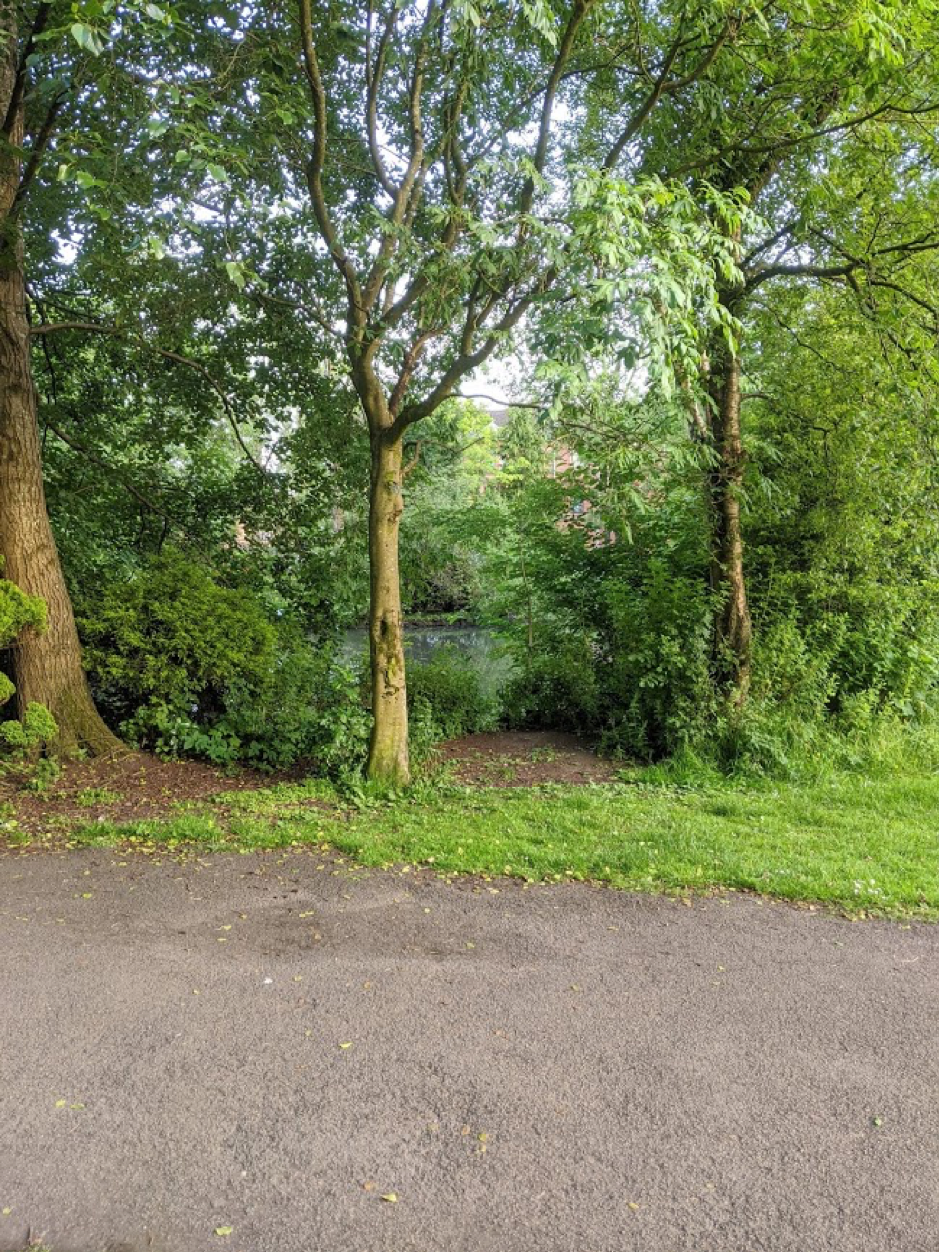 If you go to the top of the hill through the path in the trees, you will get to the highest point in the park, which gives views of Ben Lomond to the north and the Tinto Hills to the south.

Probably my favourite park on the list, it is also the furthest away. Located in the north-east of Glasgow, it is about a 30 minute cycle from Murano Street Student Village and Firhill Court, 35 minutes from Student Apartments, and 40-45 minutes from Kelvinhaugh Residences, Maclay Residences, Queen Margaret Residences, Thurso Street, Kelvin Court and Wolfson Hall.

The best part about this park is Hogganfield Loch – still within the city of Glasgow! The views onto the loch are stunning (and offer incredible photo opportunities!). 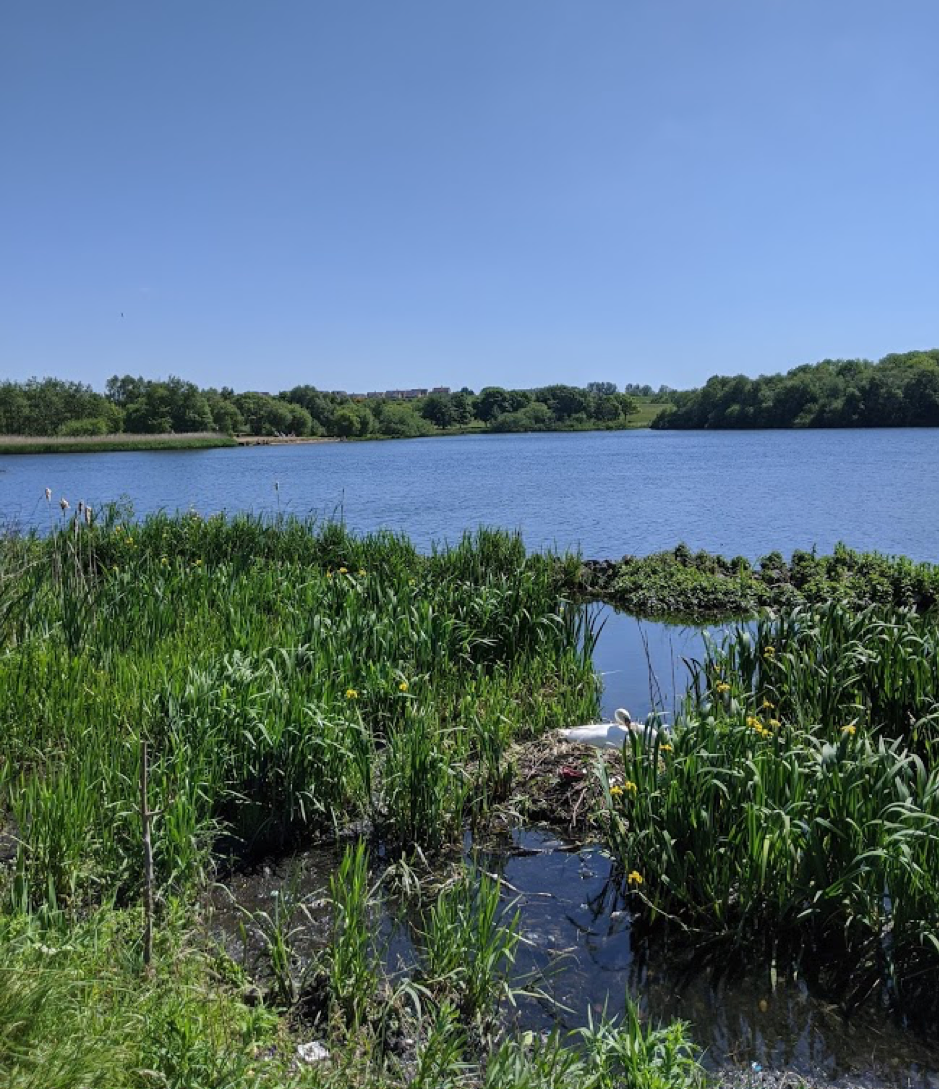 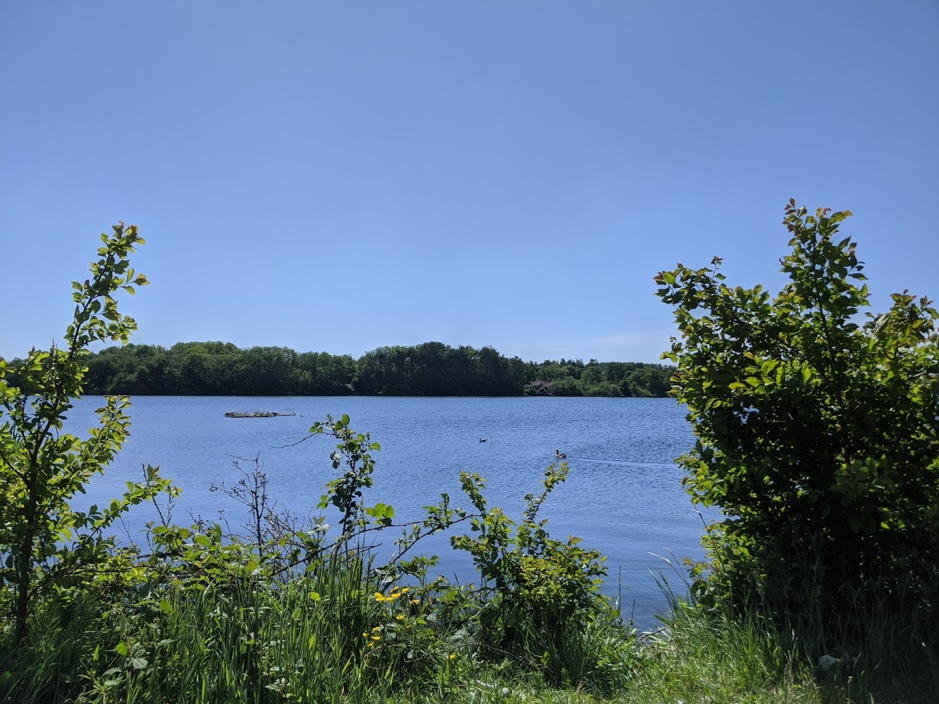 Hogganfield Park has plenty of space for picnics. This park is the first within the Seven Lochs Wetlands Park, so you can explore some of the paths further on as well. 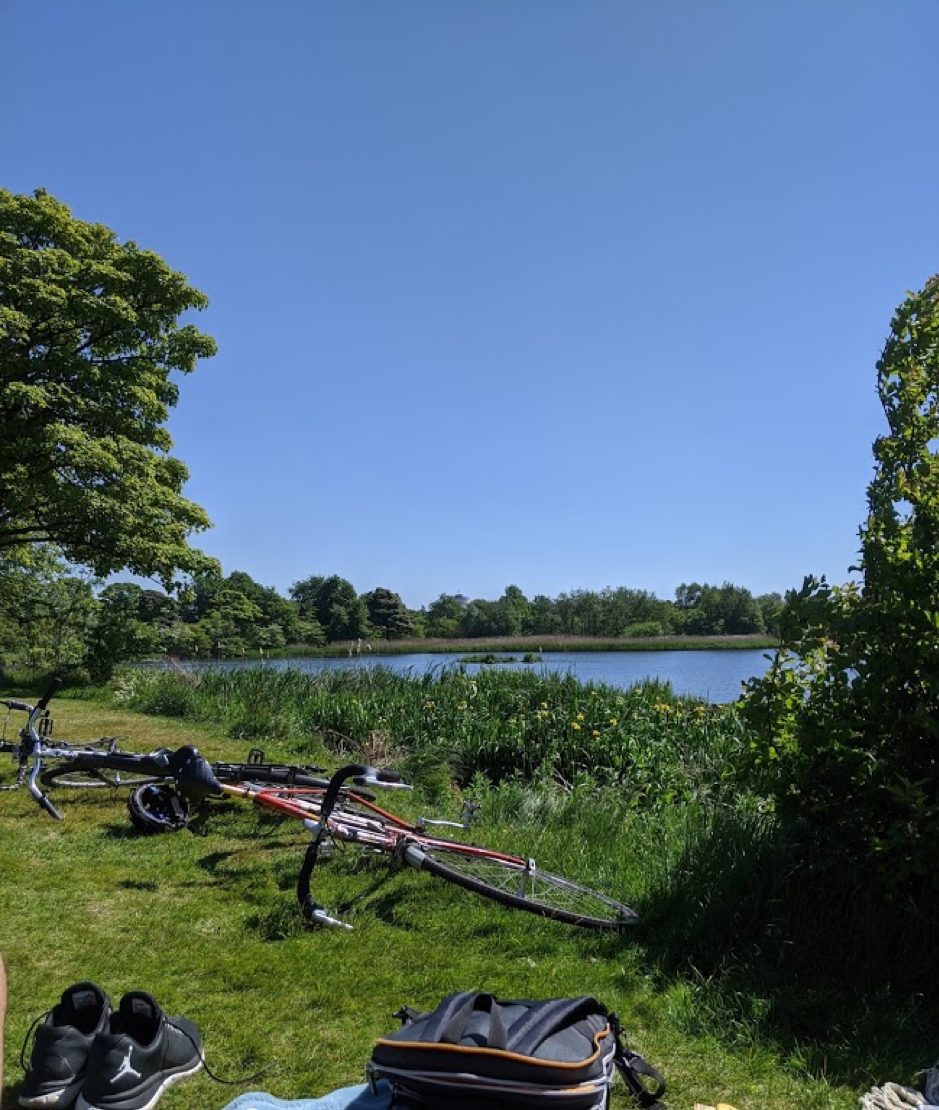 If you’re wanting to do an all-day cycle, you can cycle through to Drumpellier Country Park to another loch, and then join the Forth and Clyde Canal Path at Kirkintilloch to get back to Glasgow. I would recommend that you have some experience cycling long distances, as the whole loop starting in the West End is around 35 miles.

As you can see, Glasgow has plenty of parks to offer, and they’re incredibly easy to access if you have a bicycle! I highly recommend hopping on a bicycle and venturing to one of these parks!﻿﻿

﻿Thanks to﻿ Christine from the Maclay Living Support Team for the article and photos!﻿﻿

Your guide to the Online Accommodation System